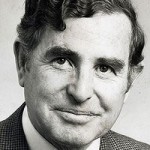 The passing of former National Party MP, Ralph Hunt AO, on 22nd May 2011, will be sorely felt by outback communities. A grazier-turned-politician, Mr Hunt was a pillar of his party, and we say goodbye to to a man, passionately devoted to promoting the interests of country people.

Ralph was mentor to Organics for Rural Australia (ORA) from its inception, as he understood Janie’s vision for nurturing the growth and future of organic and biodynamic producers in the Western Division. Janie recalls: “In one of my conversations with Ralph, he could see the struggle I was having with bureacracies, trying to negotiate funding for the producers. His advice was simple – ‘Don’t you lose your nerve, Janie’ . This has always stayed with me, and has greatly contributed towards me believing in myself and, when things get tough, to knuckle down and just keep going.”

Ralph Hunt, 1928-2011
Along with fellow ministers Doug Anthony, Ian Sinclair and Peter Nixon, Ralph Hunt was a pillar of National Party involvement in the Fraser government.

Ralph was sent to board at The Scots College, Sydney, for secondary schooling. On May 31, 1942, he was awakened in the school dormitory by exploding shells from the Japanese midget submarine attack on Sydney Harbour.

Along with fellow ministers Doug Anthony, Ian Sinclair and Peter Nixon, Ralph Hunt was a pillar of National Party involvement in the Fraser government.

Ralph was sent to board at The Scots College, Sydney, for secondary schooling. On May 31, 1942, he was awakened in the school dormitory by exploding shells from the Japanese midget submarine attack on Sydney Harbour.
Advertisement: Story continues below

At Scots, his interest in politics grew, causing him to join the fledgling Liberal Party. This did not please Claude, a friend of Mick Bruxner, one of the founders of the Country Party (the National Party’s forerunner). After Ralph returned from Scots, a Country Party representative visited the Hunt homestead to encourage Claude to organise a local branch. Claude suggested Ralph for the job and so began his association with the party.

The Hunts bought land west of Moree at Rowena for Ralph to clear, develop and graze.The property was stocked just ahead of the Korean War wool boom, which gave Hunt a good financial start and, thus, more time to devote to politics.

In 1953, he took his new bride, Sydney nurse Miriam (Mim) McMahon, to the property. From then, Hunt was a member of the Central Council of the Country Party of Australia (NSW) and chairman of the Gwydir Federal Electorate Council from 1953-69.

In December 1953, Artie Fadden, the Country Party leader, federal treasurer and deputy prime minister, came to Gwydir to help fight a by-election. After a rally at Warialda, everyone, including the local police sergeant, went to the hotel, which the local Country Party members had arranged to stay open after the normal six o’clock closing time.

Hunt said Fadden downed a few beers, then stood on the table and told political yarns and jokes. The party ended at about 1am. Everyone thanked the sergeant for his tolerance and left. The Country Party vote was a record high at Warialda.

While Hunt was NSW party chairman, Mim suggested the party start a youth wing. He thought it was a brilliant idea but persistence was needed for him to convince the party hierarchy. The Young Country Party was formed in April 1965.

As chairman of the Country Party Wool Committee (1967-69), Hunt led the push for a floor price for Australian wool auctions to combat the collusive buying of international traders after wool prices fell from 47¢ a kilo in 1968-69 to 32¢ in 1970.

Hunt enjoyed a good yarn and was a keen storyteller – including against himself. Among these was a story about him as the newest MP in Canberra. He was fuming over scurrilous claims made in a drawn-out matter of public importance debate against his friend and mentor, the deputy prime minister, Sir John McEwen, by his Labor opponents, in particular the member for Grayndler, Fred Daly.

After the debate, Hunt was keen to support his leader. He asked to see Sir John. When he was shown into the room, he found McEwen and Daly laughing about the debate over a pre-dinner scotch.

With the fall of the Whitlam government, prime minister Malcolm Fraser called Hunt to his office as portfolios were being handed out and said, ”I’ve got a good one for you, Ralph – health and Medibank”.

”But, Malcolm, I’ve never made a speech in parliament about either,” he protested.

”Good, then they can never quote anything back at you.”

As health minister, Hunt indulged a long-held concern. He had seen country families with sick children lose their farms, businesses and savings taking offspring to Sydney for specialist treatment. He pushed through a rebate equal to a return rail ticket between home and specialist for the patient and a parent.

He also addressed a loophole in the Medibank legislation that saw the forerunner to Medicare pay benefits to any doctor registered in a country with which Australia had an agreement, a result of the Cook Islands allowing cancer quack Milan Brych to set up there. Hunt’s ”Brych provision” allowed the proscribing of overseas doctors so they were ineligible to claim. Brych was the first inclusion.

When the Queensland Nationals’ premier, Sir Joh Bjelke-Petersen, challenged this by offering to help Brych set up in Queensland, a major battle was waged between the two men on the political and media fronts. Hunt won and Brych fled to California to set up operations until he was jailed for operating an unlicensed medical practice.

Hunt had another major victory over Sir Joh when the Queensland government threw eye surgeon Fred Hollows out of the state. Sir Joh claimed the teams rounding up tribal Aborigines to camp in one spot and so maximise the efficiency of Hollows’s teams were also enrolling them to vote and encouraging them to choose Labor at the coming state poll.

Hunt invited Hollows to Bourke to care for Aborigines in the Gwydir electorate, which stretched from Moree, Inverell and Dubbo to Bourke and Cobar. Hollows loved Bourke so much, he chose to be buried there.

In late 1979, Hunt was appointed minister for transport and oversaw much highway development under a scheme funded by a 3¢-a-litre fuel levy.

With the election of Bob Hawke, he decided to ease out of politics on the backbench. However, Doug Anthony’s retirement saw Hunt elected deputy parliamentary leader and remain on the frontbench until he retired in 1989.

After retirement, he served the Nationals in various ways, including as trustee.

Ralph Hunt is survived by Mim, two daughters, a son and his grandchildren.