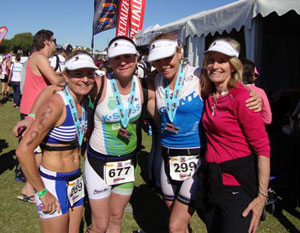 Mothers Day 2011 was extra special for this mother. Janie travelled to beautiful Busselton in WA to cheer on daughters, Alice, Caroline and Grace, in the Busselton Half Ironman 70.3 Series.

All three girls gave outstanding performances; good enough to gain each of them a coveted spot in the Triathlon World Championships in Las Vegas in September 2011! Alice had a podium finish with a fabulous second place in her age group, while Caroline’s blitzing run saw her finishing with the best time of the three girls. Was this because she had the Team Ashby support crew of Nick, Charli and Lilli Ashby, cheering her on? Gracie enjoyed the event even though her training in the leadup was marred by injury, however, with a great support network behind her, they got her going again just in time to be able to run the 21km at Busselton.

It was the third time to Busselton for Janie – a beautiful spot to be as a supporter as well as enjoy the moment. She’s now looking forward to cheering on Caroline and Alice at the World Champs in September. VIVA LAS VEGAS!