The Race at the Heart of a Nation 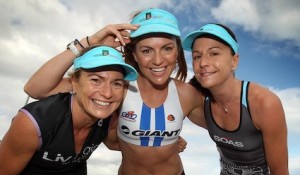 There was an immediate buzz in the air when athletes Australia-wide heard the announcement of a new, world class, Ironman Triathlon event to be held in Melbourne – a city that is often called the sporting capital of the world.

An Ironman triathlon is considered one of the toughest endurance events that a human being can complete, consisting of a 3.8km swim, 180km bike ride and finishing with a grueling 42km full marathon. Competitors have exactly seventeen hours to finish, to become an official Ironman, you must finish before the cut-off time, the event mantra, is “anything is possible.”

Not long after the Melbourne Ironman was confirmed, sitting at their computers, waiting in anticipation for the moment that entries would open, were three sisters; Grace; a model, mother, author and TV personality and whose hometown is Melbourne, Caroline a country farmer and mother from West Australia, renowned for her sporting toughness and raw talent and lastly, the eldest of the three; Alice, an executive PA and veteran Hawaiian Ironman athlete from Sydney, New South Wales. Sitting next to Alice at that moment, was her new boyfriend Peter, ready to attempt what will be his first Ironman. Apart from Christmas and triathlon events, the girls rarely see each other. They are hundreds of miles away yet united in the spirit and determination that they will do this event together. As it turns out, their anticipation and organization is warranted, the event sells out, online, in a staggering record of five minutes and ten seconds. 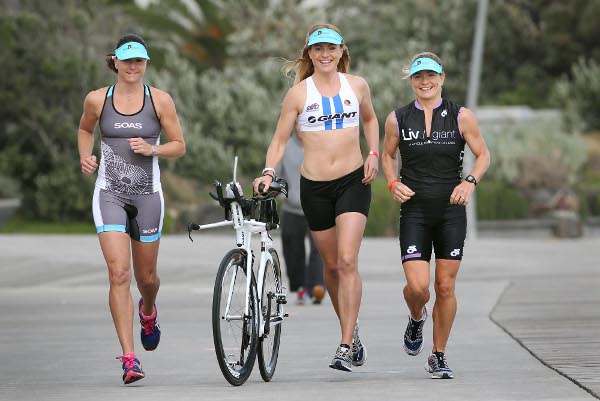 Despite living very different lives, the girls are exceptionally close, they have competed in triathlons together before, but never in a full Ironman alongside each other. They are three of five sisters, all bought up on a remote station in outback New South Wales, five hundred miles from their closest capital city and fifty miles from their closest town. The girls have been clocking upwards of twenty hours each week in training, in their words:
“biking, swimming and running our hearts out.” They say, that in some ways, the challenges of their outback upbringing; where they would work thirteen hour days outside, in upwards of thirty degrees heat, helped prepare them for the trials of Ironman. In any case, they are not alone, around sixteen hundred athletes from Australia and around the world will be competing in Melbourne on race day.

It is March 25th, 2012, the day of the event and the excitement in the air is palpable. Gathered to support and watch in awe are family, friends and many athletes who have missed out on entry and who are already planning for 2013. Alice, Caroline and Grace are excited and nervous as they check their bags into transition and ready their equipment. An ironman is not only about the competitors, sacrifices have been made by many other people connected to the event: some are supporters, others organisers, there are friends, coaches, sponsors and those who are especially close to the athletes and feel it the most, are often family members. 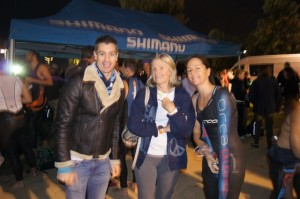 For mum, Janie—who never misses a race—triathlon is a family affair.

At this race is the sister’s mother Janie, who rarely misses their triathlons, often acting as the surrogate babysitter for her grandchildren. Also there, is their father Murray, who has travelled from the outback to see his daughters race together for the first time since their school of the air school sports days. Their elder sister Fiona, always organised and professional has made bright yellow signs baring their names: Grace, Alice, Caroline and Pete. 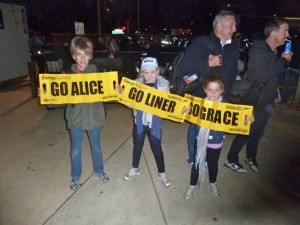 Fiona is joined by her son son Henry cheering and encouraging the girls on throughout the day; it was no easy feat for Fiona to be there, she has left her remaining three children in the care of her husband Nick on a farm five hours away. Grace’s partner John who was also entered to race as part of team with two friends, has been struck down by a ferocious flu virus three days before, still though, he battles on and comes on the day to watch and support. Their children Billy and Amelia will be at the finish line. Caroline’s husband Nick and her daughters Charli and Lilli, closely follow her in person, throughout the day. All will be there at the finish line for the moment of truth, when their dreams become reality. The only sister not there is Chrissie, the eldest; with her family – she is taking care of the outback station and who will be glued to the Ironman Live website watching for updates throughout the day from the moment the starter gun goes off.

For these sisters, triathlon is their passion rather than a job, yet what makes these Ironman events truly exceptional is the fact that everyday people like Caroline, Alice and Grace race alongside the very best professional athletes in the sport. Being the Asia Pacific Championships, Melbourne’s Ironman drew some of the most competitive professional Ironman triathletes on the circuit. In a winning time of 7 hours, 57 minutes and 44 seconds, five time world champion Craig Alexander bought home a victory to his home country crowd, only narrowly forging ahead of New Zealander Cameron Brown, they battled side by side, for nearly the whole race. The women’s race saw ‘the Swiss Miss,’ Caroline Steffen cross the line first in a time of 8.34.51 which was close to the fastest time ever for a woman.

Amongst the sisters, it was turning out to be a sensationally fast day day for another ‘Miss Caroline.’ Watched closely by her family and her new coach Pete McKenzie, Caroline Ashby was setting personal best times in all three of the swim, bike and run parts of the course. She proved the power of her own ‘ironwill,’ coming 2nd in her age-group and crossing the line in a time of 10.03.32.

Alice meantime considered herself lucky to be able race at all, in the weeks before, she had to stop running completely as a result of knee pain and injury, she wasn’t sure if she should risk racing, having had two surgeries on that knee, but these girls don’t know how not to try. She had a good swim and strong bike before calling it a day in the run transition and joining her family to cheer her sisters and boyfriend Pete on. In his first Ironman Pete went quicker than most people could ever dream of, finishing off in 10 hours, 0 minutes and 21seconds. Grace was also proving that she could do more than write a good story, guide her two children beyond autism and look pretty on camera, after a respectable swim and bike legs, she managed personal best run time by fifteen minutes, rounding out her day with a 10hour 56minute Ironman.

Perhaps one of the most inspiring moments of the day though, was when, with less than ten minutes to spare before the official cut off time and after 16 hours, 50minutes and 22 seconds, seventy two year old Peggy McDowell- Cramer crossed the line.

It can only be said that with memories made that will a lifetime, every single person involved in Ironman Melbourne was a winner.