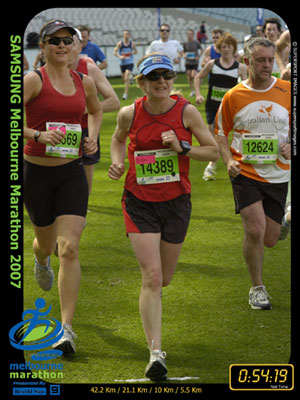 McClure Daughters, Fiona Miles and Grace McClure, ran onto the “G” (MCG Melbourne) when they completed the 10km Coffee Club run – the event was included in the Melbourne Marathon run on that same day. Only a week before, Geelong won its first AFL flag in many years on the same ground.

Fiona had been planning to compete in this event for some time with her sister Grace. Grace had experiences of competing successfully in ironman events around the world so the night before the race the two sisters worked out a plan for the race: they decided to run together and have the time of their lives!

Fiona ran fast consistently and despite a massive dilemma between the both of them at the start line (could they make it to the toilet before race-start?), they ran the race together and Fiona smashed her Personal Best.

All of the kids: Billy, Alice, Meg, Lachy and Henry, were at the MCG where all the
finishers were up on a big screen as they ran over the line and the kids were pretty proud of the fact that their mums had been a part of this. Janie (eco -granny) and Johnny (Gracie’s hubby and Billy’s dad) had the big effort of bringing them all to watch.

As the mother of my five exciting daughters, this is yet another experience they have ‘dished out’ to me and confirms my belief that life is about living and spending quality time with family and friends.