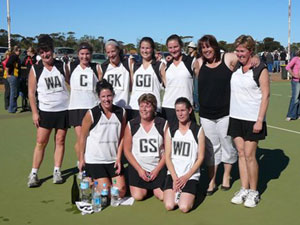 It is my third time in a row at this time of the year that I have travelled to the North Midlands of Western Australia to stay with daughter no 4 Caroline and her family Nick, Charli and Lili. The occasion each time has been to “barrack my heart out” for her “A” grade netball ball team Coorow/Latham in the grand final. In the 2 previous grand finals, they were narrowly defeated by arch rival team Morawa.

This year the team seemed different. This year the small towns of Coorow/Latham fielded a very different fit, focused, strong balanced team. I think that even Napolean’s soldiers would have been intimidated by their courageous fierce looks of determination! This year they were determined to bring back the “A” grade winners flag for the first time in 44 years. 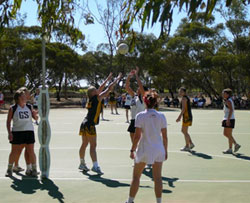 Personally I believe their success began at their very first practice which took place in the huge Judeen machinary shed at Easter earlier this year. Judeen is the beautiful mixed farming property that Nick and Caroline have been managing for the past 6 years. The girls had “fire in their bellies” as they practised their throwing, running and catching in the shed. I could almost hear them thinking to themselves: we are going to WIN this year.

In the first quarter, Morawa started the game strongly as expected however Coorow/Latham were determined not to let them have an easy run. The scores went with the centre passes for the first couple and then Morawa got an early lead by taking advantage of Coorow/Latham’s nerves.By quarter time, Morawa were 4 in front – not a position Coorow/Lathem wanted to be in at the first break.

The second quarter was as intense as the first with neither side giving an inch and both teams trying to captilise on any intercepts or rebounds. Whenever Coorow/Latham seemed to make move on their lead, Morawa came right back at them. At half time Morawa were still in front by 3. 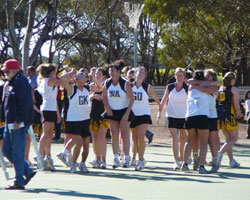 Both teams came out for the last quarter as determined as each other and it took a long time for the first goal to be scored. The lead changed with the centre passes and every time Coorow/Latham crept ahead, Morawa came right back at them. Morawa lost a couple of players due to injury. It really wasn’t until the last 3 minutes when Coorow/Latham got a couple of goals in front, that they begin to think they were in with a chance. They finished off strongly and at the final whistle they were in front by 3. The final score was 34 to 31 so it was a low scoring game really.

To me it was wonderful to see the spirit of our country people with the challenges that they take on – but most of all being the mum of champion netball player was the best. 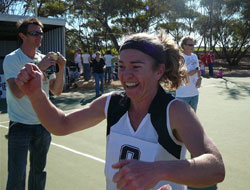 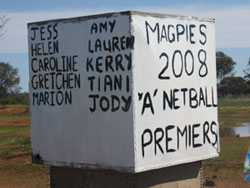