After an hour of driving west out of Melbourne, a kids toilet stop and a wrong turn…we arrived. Four year old Amelia looked delightful! She had my Akubra hat perched high on her head, as we arrived Fox Lillie Offices, Melton, with thirteen year old Billy by our side.

Amelia and Akubra in stride. She can’t help it. It’s in her blood.

Today was the day of Mum’s wool sale and even though it was a tricky time for me; with school holidays, kids in tow and lots going on; I knew how passionate Mum is about her work and I couldn’t let her down. Apart from family and friends, she truly lives for her Nelyambo Sydney Road property, the land itself, the animals and her business team. To say she is passionate about it is the understatement of the century – like saying that Rafael Nadal is an ‘okay’ tennis player or Miranda Kerr is ‘quite pretty!’

Anyway, there we were, in the outer West suburb of Melton, looking forward to seeing Eamon Timms from Fox Lillie, who has been working with Mum for a few years now on making the most of NSR’S wool clip each year. His job is to make Mum as rich as possible given the wool clip that lands in his hands from our property each year. He does this by working with her to find the best ways to improve on the wool clip itself and then market it cleverly afterwards. This can be anything from exploring which time of the year is best to shear the sheep, to picking the best day and time to sell the wool.

Back at Fox Lillie, there weren’t many cars in the car park, or people for that matter. Where were all the wool buyers I wondered? When I walked in their offices and rang the bell, I was met by a lovely young man who looked at us in puzzlement, then more closely at Amelia and said: “That’s a big hat!”

Oops….. when I asked about the sale, he cringed a little in empathy for us, then explained that we were at the wrong place, actually, the wool sale itself was at a different place… about half an hour back in the direction I had just come from and closer to Melbourne and home!

So we jumped back in the car, phoned Mum, Alice and baby Grace, who were in a different car but had made the same mistake! Then, we all headed back to real wool sale.

When we arrived to the correct location we were met by Eamon – who was ready to go, he was so organised, he even had ice-creams for the kids! It all took a turn for the better from there. We did a few photos of the family with NSR wool to be used for media and then the sale was on. Alice joined Janie and Eamon for the entire sale. She is becoming more involved in the business while enjoying being a first time mum to Baby Grace. Anyway, at the end of a busy day, Janie says the result was pleasing and that the wool sold above valuation. 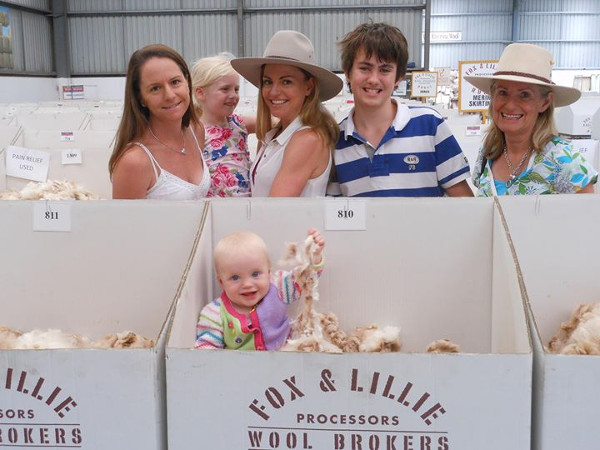 Selling wool into a rising market at auction and the next generation “getting immersed in wool “ – a good day out! From left to right: Alice McClure, Amelia Stephens, Grace McClure, Billy Stephens, Janie McClure and Grace Ainsworth (immersed in wool!)

When you are passionate about what you do, it shows. 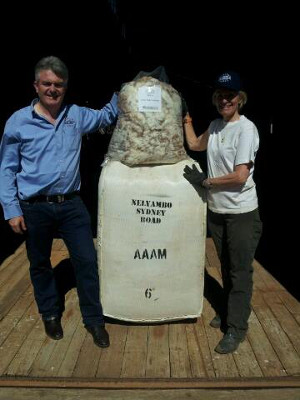 December was shearing time at Nelyambo Sydney Road. Eamon Timms and Janie McClure are pictured holding a lovely fleece which has been kindly donated to the Royal Childrens Good Friday Appeal. All fleeces donated will be pressed up and the bales auctioned in April 2014 with all funds donated to the worthy cause.

One problem which the team is working towards finding solutions to is the ‘high VM’ which refers to ‘vegetable matter or native vegetation including copper and clover burr’ that has occurred in the wool in recent years. What this means in simple terms is that wild plants (VM) which grow in the area, unfortunately get caught up in the wool – so it isn’t as clean as would be ideal. The management team has changed parts of the process and has future plans to keep improving this issue.
Janie says:

One of those is working towards making the wool organic, which will mean using allowable products – this means allowed by the Australian organic certifying body. However at the moment, allowable organic products do not stop fly-strike. Fly-strike does and has killed many of my sheep in the past, so the priority is always to keep my sheep alive and healthy – and this must be at the expense of losing organic certification if need be. However, I have hope that we can get to being organic in the future – if we get back to end of September shearing and work out when to crutch strategically. The timing is important because October has been traditionally the worst month for the fly waves. I’d also like get ‘Vetrosin’ allowed by Australian Organic certifying bodies. This is an input, which combats fly-strike and is allowed by organics in England but not here as yet.

For Janie, it is in her nature to provide loving care in all her work. She speaks daily to her property manager Rob Ingram and is in regular contact with her daughter Fiona and son-in-law Nick Miles, who provide the ‘finishing off’ stage of the organic beef and lamb side of the business.