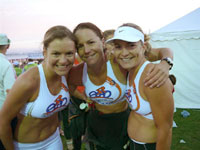 On 3rd February I watched three McClure daughters, along with my grandson Billy Stevens, at the Geelong Half Ironman. Also racing with them was Gracie’s husband, Johnny Stevens, and his best mate, Tully Young.

Since her recent Mark Webber experience in November, Caroline had kept her training on track as she prepared herself to do the 21.1km run leg in the Geelong Half Ironman. Her bible was sisters Grace & Alice’s personal training programs, and although she initially resisted their attempts to hold her back to have at least a few recovery weeks, she eventually followed orders! 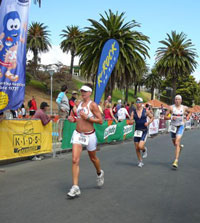 A strong finish for Alice saw her come in 5th in her age catergory.

Alice did the whole race 1.9km swim, 90km bike and 21.1km run – she came home most composed as you can see in her home run photo. Her experience of competing in two Kona Ironman races over the past 2 years enabled her to pace herself for this event and so completed it with ease and style.

Grace, too, was racing individually, and completed the 1.9km swim but a niggle in her hip stopped her on the second lap of the bike which was a bummer for her. Team Kaboom consisted of Tully doing the swim, followed by Johnny on the bike and finishing off with Caroline doing the half marathon run. They had a lot of fun in the lead up to the race, with many emails criss-crossing from east to west as part of their preparation. 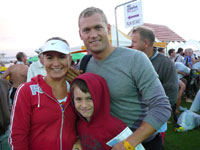 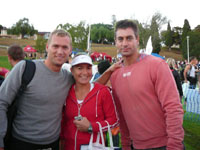 Tully did a great swim and it put Kaboom in a strong position for Johnny’s bike leg. Johnny, competitive as he is, was determined to ride flat out. One of his aims was to catch Alice, who had started 10mins before the teams. His 35kph+ pace meant he was constantly passing people and he rode into transition in a time of 2:37, just steps behind Alice, which was a great accomplishment, not to mention it put Caroline in a good position for the run. 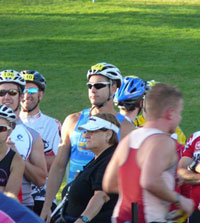 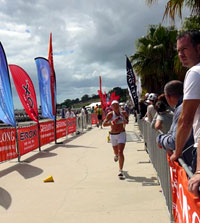 Caroline commenced the run in 6th position and being her first 21.1km race, it was a real buzz! She came home like a Bondi tram – finishing strongly with a credible time of 1hr 31m 15secs. Watching her sprint across the finish, she looked like she could have gone back out and done another 21km again!

Team Kaboom finished 6th; Alice finished 5th in her age group with her 3rd fastest Half Ironman time, a great effort considering her limited training due to starting her own personal training business. 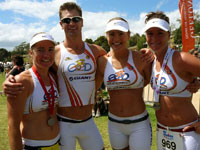 It’s all about the image!

Grace organised the SLICK outfits through her sponsors and they stayed in the Stevens’ beautiful beach house near Lorne over the weekend. Although Grace didn’t get to finish the race, her support to her sisters, not only throughout the race but also in the lead-up, was amazing and they did actually race together for a short period! Grace’s hip looks like it is finally on the mend and on track to compete in the Hawaii Half Ironman. 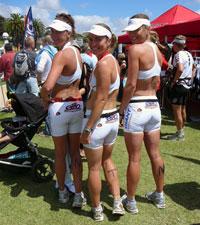 As for the three of them racing together again…we will keep you posted.

There has been talk of the Busselton Full Ironman in December this year!!!