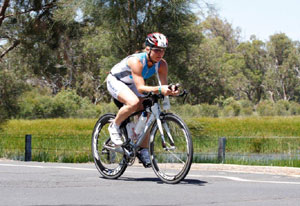 On Dec 5th 2009, daughter no.4, Caroline, capped off 2009 with another notch on her belt — completing her first Ironman at beautiful Busselton, WA.

Just earlier in the year, in May, she completed her first Half Ironman, also at Busselton. How fast she progressed, once she caught the Ironman bug!

It’s an extreme event, pushing your limits both physically and mentally, but ask any Ironman: the hard work is done way before you line up before the gun. The gruelling training; the rigorous schedules; the dedication needed just to you get to that start line. Now try doing all this when you live and work in the heat and dust of outback WA, and this is what Caroline had to contend with. 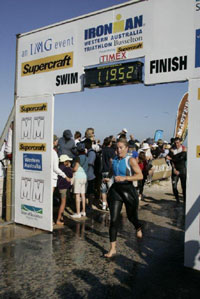 Caroline followed a training program created by coach John Hill, backed up with lots of talking to big sister Alice, a veteran of 7 Ironmans, who had lots of Ironman experience, hints and tips that she could draw on. Swim training was in the dam as the local pool was not open. Rides were on the stationary wind trainer (and anyone who’s been on one will tell you it can become brain-numbing very quickly!) If she was lucky, a friend who had holiday house on the coast more than 50km away, would keep her company on her long rides on the weekends. All training had to be done very early so she was back before husband Nick went to work.

Going into the race, Caroline was a bit unsure. She was confident in that she had done the hard yards in training, however she was carrying an injury which she sustained just 2 weeks before – a pulled muscle in her hip and bottom during her last long run. She fought the niggling doubts — could she finish the race? — and decided to simply take each leg as it came. Her hip started hurting in the swim which did not forebode well! Even more acute pain on the bike, and when it came time for the run, her hip muscle gave out after the first 2km. In an ironic stroke of luck, her other hip gave out at 6km so she was balanced! She knew she just had to keep going to get to the end and kept chucking ice down her running shorts – a little trick Alice taught her to keep cool! 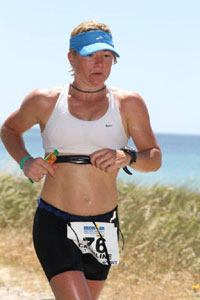 Even with her injuries, she still ran the 42.2km marathon leg in 3hrs 44min; a feat many a runner would love to accomplish, let alone one who had done a 3.8km swim and a 180km bike ride just beforehand! Coming into the race, Caroline had not expected to finish anywhere near Alice, because of her injury and the fact that Alice was a veteran of 7 Ironmans, while this was Caroline’s first. All she wanted to concentrate on was her own race and her own race alone. With Alice’s help, she came into this race thoroughly prepared – nutrition wise and race ready. Alice taught her every trick in the book and, as Caroline ran past her in the run leg, Alice was probably questioning the sensibility behind that move! But, ever the supportive big sister, she called out encouragement to Caroline, telling her she was “smashin’ it”!

The last 2kms were killers. Caroline felt fine right up until then, but with everyone telling her she was “almost there”, she said it felt like 200kms! She picked up the pace over the last few hundred metres but once over the finish line, her mind finally succumbed to the exhaustion that the rest of her body was feeling and she had to be helped off to the recovery tent. 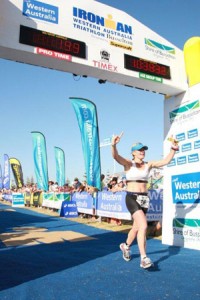 Caroline reckoned she downed three 750ml bottles of water in 3secs!!! 2 hours later, she met up with Nick and Alice, and headed back home. Enroute was a stop at Red Rooster to satisfy a sudden craving for some hot, VERY salty chips. She never eats hot chips but wolfed these down. After all, she had just done an Ironman, one of the toughest multisport events on the planet!

Caroline was keen to get back to the kids, who were at home on the farm, babysat by Nick’s mum. All her friends and family back in Eneabba were tracking her progress online and were very proud of her achievements. Eldest daughter Charli wants to do her first triathlon this year. Who knows? Maybe we’re looking at the next generation McClure-Ashby Ironman girl in the family!