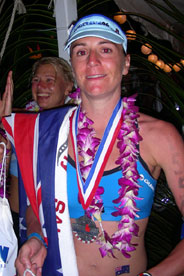 Who would’ve thought, this little urchin from the bush would be going to Hawaii? Living and experiencing the challenges the environment throws out living in the outback, seeing this life, you think she can deal with anything.

Not knowing that she has “School of the Air” and “Boarding School”, now you would think she could survive anything; but wait..there’s more.

Alice also had four sisters which meant four less farmers to impress! Pushing this aside, her strength and determination made her set the highest goal.

Alice has been in training for three years trying to make her fit enough; she has to swim 3.8km, which is a huge distance, that’s many laps of a dam. Thinking that’s hard enough, they put her on a bike for 180 km, maybe she should have rode a few more times on her push bike to town. Then if you think you’re almost dead, they make you run for ages. If she knew how much more petrol she needed, she would have offered to Dad to muster the sheep on foot but 42km. All jokes aside, Alice is lucky they picked her as one of the five Australians to compete. She’s ready to show the other seventy competitors how tough us Australian Girls are plus maybe stretch the truth about stories of her youth. Alice’s Dad always wanted a boy so maybe a iron man will do, so look out Kona, Hawaii, a Broken Hill girl is about to show you her best. 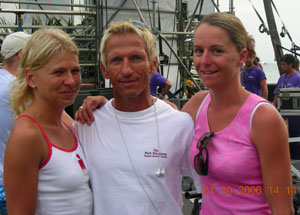 Race day is approaching; she has support from her coach, John Hill, and her mother who has flown in from Melbourne plus all her support crew at home. The tension is mounting. She starts to nervously sweat and then she is off on their first leg of the race. Time is now her competitor. Nervously awaiting at home for results, are daughters and friends texting on their phones, how is she going, how is she doing are the questions asked. She completes the Ironman in 10 hours and 58 minutes, coming 22nd out of 70 in the world (women’s 30-34 age group) and 3rd out of the 5 Aussie women that qualified. 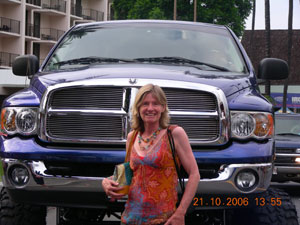 Unbeknown to Alice, her group of friends in Hawaii had been treating her mother like a queen, a queen in Hawaii. Well, live it up because you’re back to Melbourne and reality soon! Janie let her mind wander back to just before leaving for Hawaii, when Granny McClure went back to the School of the Air; they were celebrating 50 years of service to outback kids in Broken Hill. Reminiscent of Alice’s sporting achievements, and to think what a little rascal she was, and then to have her grandson, Will Ashby win in his age group at this years School Of The Air sports day, was a good omen. 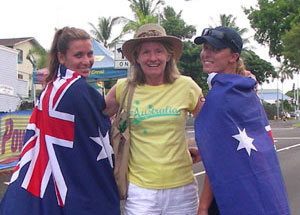 As Alie ran over the finish line with our Australian Flag, we were so proud of her – who would have thought that this little rascal from the outback could nurture and develop such discipline that she would one day be performing with the best in the world. Now I believe that it does not matter who you are or where you are; you can do anything if you want to.

Remembering the girl may move to the city but you can never take the bush determination away from the girl. 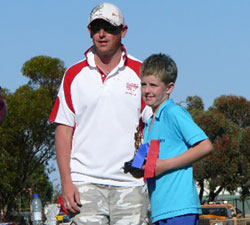 Will Ashby’s win in his age group at his School Of The Air sports day, was a good omen