Meet Meran Downs Biodynamic Farm, who are one of our most valuable and exceptional growers. Produce available in shops this week!

Fifth generation farmer Cameron English, Kirstie and the girls Emily and Annie live at Lake Meran between Kerang and Boort in northern Victoria. The property Meran Downs is a mixed irrigation and dryland farm traditionally producing cattle and wheat.

Cameron’s forebear Rebecca English initially ran a grocery store in Ballarat with her husband during the Gold Rush, but foresaw the decline in gold and purchase farming land between Charlton and St Arnauld. Left a widow with five young children Rebecca left Ballarat for Dootabetic and continued to search for more suitable farming land. Rebecca finally decided on property on the shores of Lake Meran, being subdivided from the Swan Hill Station on the condition it was fenced and the rabbits removed. Rebecca purchased 1650 Hectares and divided this between her sons in the mid 1880’s.  She was drawn by the opportunity to develop irrigation farming on the side of the lake which holds approx. 8000mg when full. In the early days at Meran Downs, they fenced and netted the boundaries (some of which can be still seen today) and trapped and shot the rabbits. They installed a large steam engine to pump the lake water around the lake flats for irrigated pastures and crops. By 1908 Meran Downs was recognised for pioneering irrigated lucerne to feed and turn of fat lambs. In 1888 Meran Downs began recording rainfall records for the Bureau of Meteorology which still continues today. Throughout the years the enterprise mixes of cropping and livestock has fluctuated as labour, mechanisation and economics have influenced decisions.

Today the farm consists of 700 Hectares the original farm of William English, Rebecca’s second son. A concentration on livestock and cropping has been maintained throughout the generations.  Cameron’s father Bruce now 82yr of age became interested in Biodynamics after a visit to a naturopath in Blackburn.  Marcus Try sowed the seeds of change in Bruce’s thinking which lead to him attending a Demeter Biodynamic conference and then adopting  Alex Podolinsky’s Biodynamic principals, seeing the farm fully certified in 1988. Cameron returned to the farm completing his farm apprenticeship and participated in the transition from conventional to full certified Demeter Biodynamics. 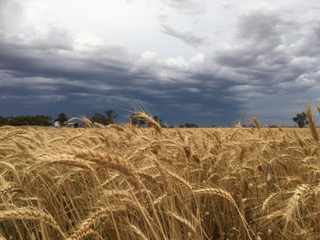 As the succession from Bruce to Cameron was undertaken the Millennium drought played an important role in influencing the farm operation. Meran Down’s shorthorn cattle herd were normally run on the irrigated pastures and a merino sheep flock on the dryland with a 1:3 cropping program rotating around the two. During this drought, the reliable water supply from the lake was diminished and was lost as the lake became dry for the first time since the 1850. Irrigation supply from the Goulburn channel system was reduced and a stock and domestic pipeline was install to service the dryland areas of the farm. The changes in water availability and quality forced Cameron and Bruce to suspend a successful small horticultural enterprise of growing irrigated trellised passion-fruits.  Drastic decisions were made during this period to maintain cover on the paddocks and avoid the loss of top soils. The farm had traditionally carried up to 1000 sheep and 50 breeder cattle. The decision was made to drop the sheep and rotationally graze cattle over the entire property creating more of a feed buffer and thus maintaining cover over the paddocks. This has seen the return of many grasses, wildflowers, native bushes and trees. The feeding habits of the cattle has seen these plant flourish rather than being nipped off by the sheep as in the past. As the farm labour decreases as Bruce steps away from farming, labour saving measures have been introduced, including the reduction in the variety of grains grown, reduced hay production and the dropping of the sheep enterprise. Today the farm focuses on producing high protein wheat, hay for supplementing the cattle production and a Shorthorn self-replacing herd running between fifty to eighty cows depending on the seasons. 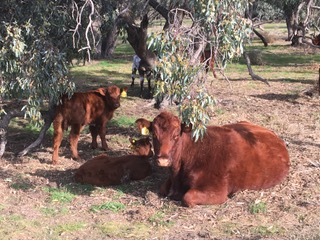 Over the years Meran Downs’ produce has been sold under the trading name of Meralish Partners (Mer– from Meran and ish– from English) and has been sold domestically under Demeter certification. For a short period in the early 2000 wheat was exported into Europe through B.D. marketing requiring shipping containers to be filled on farm. Milling wheat and rye corn has been sold to a number of millers throughout the country and feed wheat and seconds to dairy and chicken farms.  Yearling beef has been sold into a number of butchers in Melbourne in the past and presently two BD certified business purchase and market the meat under their own label. Weaners turned off at roughly twelve months of age are a live weight of 400-430 kg with carcass weights of 220- 250kg.

Biodynamics presents its challenges particularly in drier periods as a prepared 500-spraying program is undertaken each year across the farm. Cameron endeavours to begin spraying after an Autumn break preferably in April, however the changing nature of the seasons dictates when this can occur. With dryer winters becoming more of a norm, finding suitable spraying opportunities is limited. To undertake spraying, Cameron uses a removable tank/boom system partly built by Bill Chandler and the tank component by Bruce and Cameron. A trailing marker was used to guide applications, which has been superseded by a GPS guidance system. This allows greater opportunities for spraying when conditions are favourable by allowing night time spraying to be conducted. Cameron and Bruce started out with a two-barrel stirring system from Bill Chandler which they traded for an improved system about 20 years ago. The present stirrer sits upon an old truck trailer including an instant gas hot-water system. The hot water system is set to warm the rainwater to 37C and a six-horse powered diesel motor powers the stirring mechanism. The elevated system allows the 500 to gravity feed into the tanks as the ute drives underneath.

Cultivation has been used throughout Meran Downs history, although increasingly avoiding extra workings when possible. Cameron is currently using a tandem disk with the idea of turning pasture in (green manuring) to build the soil and reduce weed seed set in the spring in preparation for the coming Autumn sowing. Cameron tends to leave his fallow in a state which is not susceptible to blowing as the dryland soils are a light Mallee sandy loam. These soils are fragile in dry windy seasons and require protection. Cameron is questioning and has experimented with a number of different ideas in recent year. 2016 saw Cameron drill feed oats in to a dry pasture paddock in the Autumn with the idea of turning them in, in the Spring. The idea was the oats were to add green bulk to the pasture species. 2016 saw an exceptional wet winter spring. Plans changed as the paddock was too wet to green manure, Cameron decided to take the oats on to make silage. Rain and growth continued so the opportunity to make silage was missed and hay looked like the best result. Here again the weather had its own ideas and the oats were eventually harvested and the paddock was made into hay the following year. 2016 was also a year of amazing tonnages in wheat production, the best harvest since the introduction of BD. The farm is still seeing the reward of 2016 in the retained stubbles. These stubbles have been allowed to stand and breakdown naturally, mulching the soil and protecting the pasture growth. They have given Cameron confidence to run the cattle on the dryland during this long dry season as they soil remains covered.

Differing ideas and techniques are used on both the lake paddock and an irrigation block on the Wandella Creek. The creek soils are a heavy, crumbly, rich black soils type where he lake soils are a rich dark sandy loam. The lake soils are the first to respond after the Autumn break in terms of cattle feed and the dry land is the last to respond. During the early Autumn irrigation is used on the creek block and occasionally the lake paddocks to bring up a reliable source of cattle feed while, there is still warmth for its growth. Weaner cattle and calving cows utilise this feed until an Autumn break occurs with the ability to strip graze the pastures if required. Cropping occurs on a smaller scale on the irrigation country mainly to secure cattle fodder as in hay and silage and as a seed reserve. 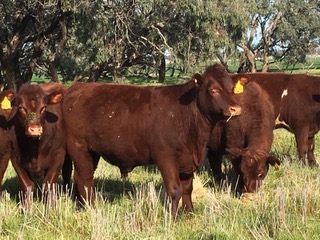 A program of infrastructure replacement is ongoing, seeing fencing replaced and new cattle yards installed. Future plans include continued fencing replacement and subdivision of the largest dryland paddock to better facilitate rotational grazing. Securing a reliable water supply for the lake paddocks and flats is imperative, as reliability and quality is reduced.

BD has helped in our soil development over the years creating richer deeper soils colours across all soil types. Even after a dry 2018 with only 225ml falling across the year down, from our mean of 370ml, friable soils have been maintained. Our BD farm seems to create its own atmosphere, at times fog, forms over paddocks and stop at boundary fence line, neighbours comment that we receive rain which they don’t. Our soils seem to accept rain when it comes and leaves the surface feeling like a sponge where water runs off our neighbours. It is our belief that our BD principles create vibrant soils which create highly nutritious plants, feeding cattle and humans alike. Our paddocks are alive with insects including numerous varieties of ants and a haven for a number of wild bee hives. Native animals make their home on the farm in the remanent veg and feed in the paddocks. It not unusual to see flocks of Ibis venturing into the dryland paddocks rather than following the water line when irrigating. Quail make their home in the dryland paddocks and flock of Grey Crowned Babblers frequent the lake flats along with many other birds and reptile including turtles. It is our belief the farm is in better condition now than when first settled when overrun with rabbits. We believe that Demeter Biodynamic principals have help to achieve this.